An early spring moto-trip in search of new views

My friend Nick and I took advantage of one of the first warm days of March to jump on the bikes and head north from Muncie to the Wabash River valley in search of new landscapes. Despite a mild winter, cabin fever had hit us both hard and we were itching to get out.

There is no argument, the majority of Central Indiana is flat. The last Glaciers plowed through the northern half of the state leveling the landscape over 10,000 years ago. While this area is known for dead-flat farmland, once you enter into the big river valleys of the Wabash and Mississinewa rivers, you can actually find some really interesting topography.

These rivers carved down through all the glacial deposits of sand and gravel since the retreat of the glaciers creating wide valleys, but leaving some interesting remnants of the area’s pre-glacier topography. One of these is “Hanging Rock” which contains a portion of a Silurian-era coral reef formed when Indiana and much of the Midwest was covered by a warm, shallow sea. When the Wabash River undercut the rock, the top of the rock was left overhanging its base, 65 feet above the Wabash Valley — thus the preserve’s name. Native Americans used Hanging Rock as both an overlook and a landmark. This site is a National Natural Landmark and is protected by the Acres Land Trust.

Three large reservoirs were built along the Wabash valley in the 1960s. The Mississinewa, Salamonie and Huntington/J. Edward Roush Reservoirs were constructed for flood control as well as creating opportunities for recreational and wildlife habitat. We stopped at the Mississinewa River spillway, which was already busy with fishermen and people launching kayaks. The river level was up a little, and running brown from recent rains. Almost immediately we spotted a bald eagle flying overhead. We had heard that this area is a favorite for the big national bird, and sure enough we spotted 3 more. I put on the big telephoto lens and was able to snap a few pictures before they moved downstream.

Just downstream from the Mississinewa spillway is another interesting geologic feature. You have to take a couple of narrow country roads to get there, but the view is worth it. The 7 Pillars of the Mississinewa River Landmark is another 148-acre area protected and managed by the Acres Land Trust. The most stunning area is a bluff along the river that features 25 ft pillars of limestone that tower over the river. During low river levels, when the river is clear, some of the area is pretty shallow and the river bed is almost all bedrock, allowing you to wade and explore the area. Visitors should be warned, due to the close proximity to the spillway river levels can change suddenly if the dam increases the water discharge rate – keep an eye out for rapidly rising water!

From the 7 pillars area, you can follow a scenic road along the river to the west. Not far away is the city of Peru, famous for its historical ties to the Ringling Brothers (and other) Circuses, and home of songwriter Cole Porter. We stopped for lunch at Smitty McMusselman’s Pub to fuel up and give our butts a rest before the hour and a half ride home. After enjoying some nice curvy backroads of the river valleys, the arrow-straight roads were a bit boring. Luckily our helmet communication devices allowed us to start planning our next moto-adventure to new areas of interesting topography and geology.

Below was our route on this trip. We took mostly backroads, avoiding highways. 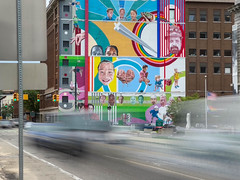 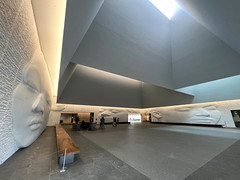 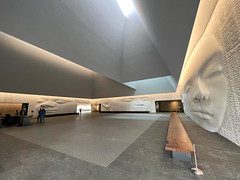 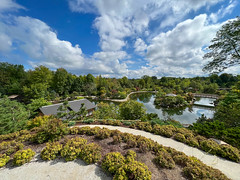